In recent days, the new mayor of Panama City has presented the 120 million USD plan for Panama City to have its own city beach. Following the example of Rio de Janeiro and Barcelona, a large beach with various other leisure attractions is to be built directly on the city’s promenade over the next few years.

Until the 1960s, the citizens of Panama City had their city beach, which was lost in the following years in the city and population development.

According to the Smithsonian Institute, the plan is feasible since there have been major efforts and projects since 2006 to improve water quality in the Bay of Panama City. The greatest challenge is to continue improving the city’s sanitation situation. Such a prestigious project naturally also offers many opportunities for international companies interested in participating in this project.

On the title photo you can see a visionary picture, how such a city beach could look like and on the following photo how attractive Panama City looks already now. 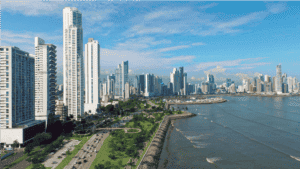 If this project really is successful, it would significantly upgrade the attractiveness of Panama City as a real estate location.

The real estate market in Panama is internationally one of the most interesting locations for real estate investments and we would like to be your local representative and take care of your real estate in Panama on a sustainable basis.

Through our newsletter you will be regularly updated with all the latest information.